2022 Update: To say that Bitcoin had a wild valuation increase is an understatement. It is currently at >$41,000. It continues to become more adoptable as an alternate currency, and perhaps has reached the point of enough acceptance for it to be viable.

One, which tends to include workers in Tech and those affiliated with it (e.g. VCs), are the intrinsic flag bearers of Bitcoin.

It makes sense when you think about it: the organic elements of Bitcoin cleanly map to the attributes of any conceptual product within the tech ecosystems.

Being able to see the value in something that is virtual. Being able to innovate into new services and technology that go on to become market creators or market disruptors.

They envision Bitcoin as a utility for a parallel economy that is not based on any sovereign nation’s currency.

The other camp? It’s comprised of everyone else: Those that hesitate at the concept of not just a new currency, but at a new type of currency in which there is no intrinsic value beyond the good faith of other bitcoin owners.

This camp is also comprised of most people in finance, so, it all begs the question: What has caused the dramatic rise we have seen of over 1,000% in the last 10 months?

The offering of bitcoin futures, which are a type of derivative. Remember derivatives? They played a large role in the 2007/ 2008 global financial meltdown.

So, now not only are derivatives back in fashion, but now there is a new one: a derivative of a derivative (which one can argue Bitcoin is).

It can be esoteric, even though I do have clients with Bitcoin wallets in their overall portfolio and also see it as a proxy of blockchain technology.

OK, so back to this latter camp. This graph of the Bitcoin runup (courtesy of Elliot Wave International, Yale School of Management, Global Financial Data and Convoy analysis)best conveys what gives this camp pause: 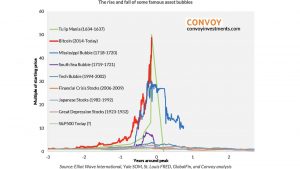 They see a bubble. A manic bubble.

I don’t think it’s coincidence that this is happening at the height of the second longest bull market the US stock market has ever had.

Whenever there’s positive sentiment in one type of asset class, it has a tendency to create a halo effect for other asset classes.

And that, I suspect, is exactly what is going on.

So, my advice to you and your Bitcoin wallet? It’s the same as my advice for any asset that has had a vertical rise: start to divest to bring your portfolio back to it’s target model and target risk profile.

It’s not a binary statement in which you have to sell all of your position, just like it wouldn’t be for selling any other asset class. It’s a universal Best Practice to never lose sight of the larger purpose that any part of your portfolio plays in your life: living life on your terms and having the financial means to do so.

Sorry, boring, I know. Yes, the advice holds all the same.